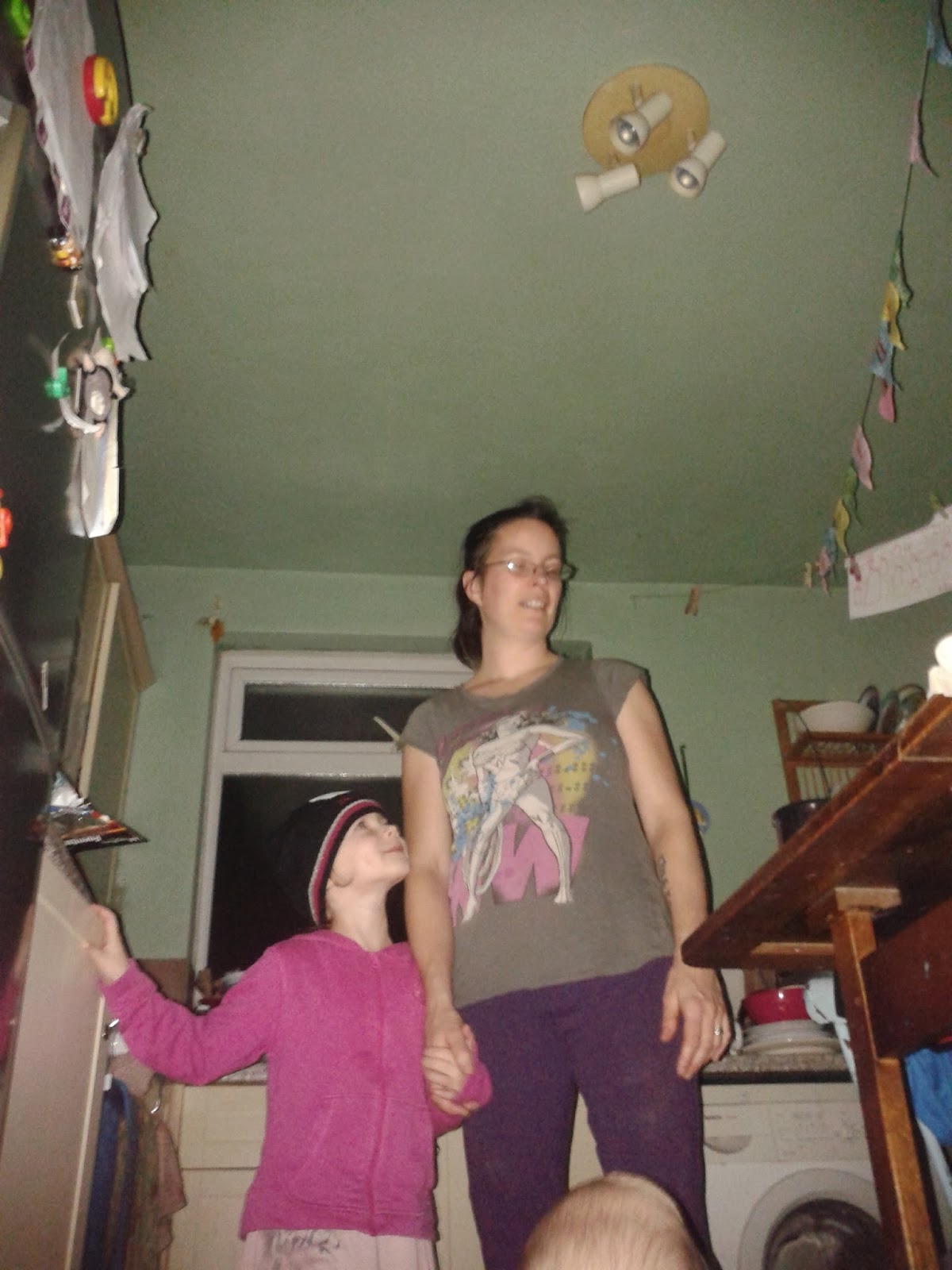 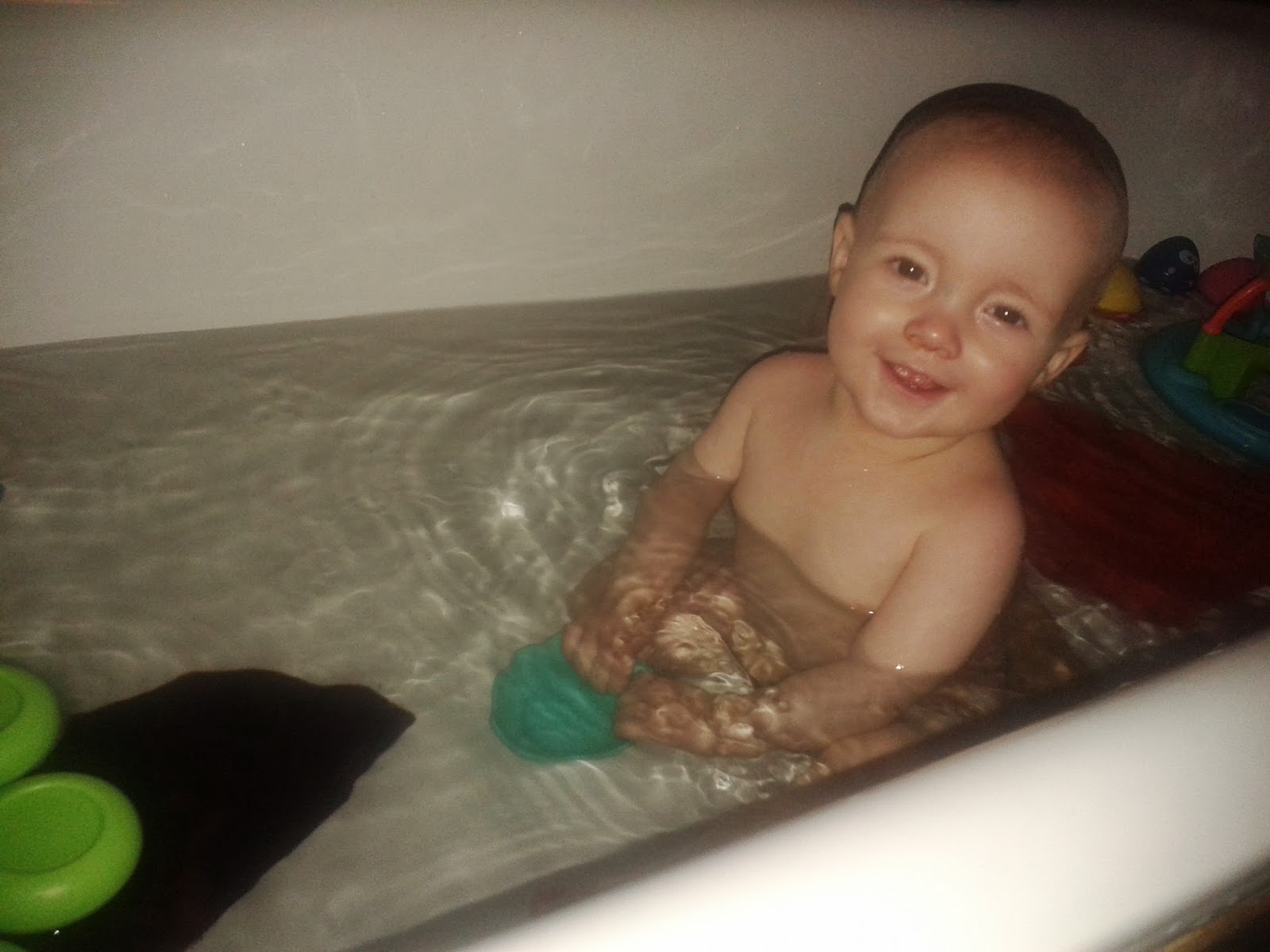 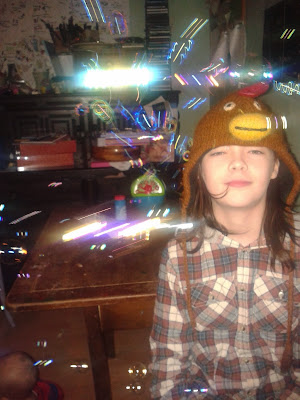 I entered a competition at http://tattooedmummy.blogspot.co.uk/  in the later stages of last year, one that required me to tell you about a favourite toy from my childhood. Ken the (probably way too violent) giraffe had his day in the sun and I really enjoyed remembering those guerilla warfare days. Now I didn't win the competition, but I was contacted by the lovely Sian at http://www.onestopbugshop.co.uk/ who was providing the prize. She said she enjoyed my post and wondered if I'd be interested in reviewing a toy for them.

So, we have been in the middle of a damn busy Christmas period in which I decided to paint the hall as well as do all the standard Crimbo things, and hence, I have been busy. But now comes the time to tell you about my excellent new friend.

Meet 'Bramley.' He's a cool customer who likes to party!

Now, here's a bit of general bumph about our red and black friend. He's a toy from the 'Wigglers' range, made by The Puppet Company. He's a puppet with both a head AND tail pocket and he has two big eyes, with very large black pupils and and gorgeous blue iris'. He has two small deely bopper type horns and his fur is a soft as a cats; it's lovely, thick and is very relaxing to stroke.

His tag says he's not suitable for children under twelve months, so I would have thought soaking him in dribble and swallowing his fur is a crap plan, but really, he's a harmless wee fella other than that.

Right, glad that's over! Let's have some fun!

Okay, so Bramley is a bit of a serious name for such a soft customer and so I have renamed him 'Sid,' not as in 'Vicious' but just in a nice short named kind of way. It seems to suit him and I can tell you that he approves. Now those of you still paying attention probably noticed he had two pockets, well that's so you can control both ends (something that appeals to anyone that needs Imodium). Three fingers go in the head pocket and then, if your arms are really short, like kid small, then two fingers from the other hand go in the tail end. If you are a bigger person then poor Sid isn't quite long enough for that sort of action and so you have to more obviously control him.

Sid is bendy enough to perform a variety of groovy moves that wouldn't be out of place in a Run DMZ vs Jason Nevin music video, including 'The Caterpillar' and 'The Snake.' Of course you will have to make him hit those dance move highs yourself but he really isn't hard to control, in fact, it really isn't hard to get him wiggling around at all.

He doesn't have a vast amount of movement but with any puppet it depends on the person to deliver the character to the puppet, the human has to bring it to life... and Sid is a lovely toy to have that rapport with; he's soft, colourful and generally a pretty gorgeous toy.

Other things about Sid? Okay, well he's colourful, colourful enough to stick out, but there are six Wigglers to chose from on offer and they are all bright and vibrant, so I'd suggest taking him places is pretty fun and perhaps he's slightly harder to leave behind than other toys. Rolling him up brings him to about the same sort of size as an adult pair of gloves, meaning he fits easily into a coat pocket or a trouser pocket without any trouble at all.

So, Sid is good for playing with, is a friendly, soft companion and a good listener, he also travels well, is tough to lose and is soft enough to just stroke like you would a cat, only you don't have to feed him. To be honest I got all Bond villain with him and if he sits on my lap I can't help but pet him till someone comes and takes him off my hands.

I'd like to thank Sian and The One Stop Bug Shop for sending us this lovely fella. He's a wonderful addition to the family. :-)

'Sid' aka Bramley is available from the http://www.onestopbugshop.co.uk/ and retails currently at £7.79. We loved him and I think you probably would too... though get one in a different colour, yeah,  because I like thinking that we have the only 'Sid'. Okay?

Posted by @eddsnotdead at 08:12 No comments:

At the beginning of a new year there is a sense of renewal. The promise of hope and a fresh start... or some crap like that. For me, of course, there is a feeling of new luck and I apply that to one of my favourite games of the year: The cinema game!

Each year my buddy and I hit the cinema as much as possible, realistically that means we go every Thursday unless something like life or illness gets in the way. We realised a few years ago that if we didn't go, even if there wasn't something good on then we wouldn't be getting the full use of our cinema cards; the very things that make regular cinema trips affordable, so we started the game. Simple rules for a simple game; if there is a week in which there isn't a film on that either of us want to see then any film is clear to be picked, no matter how shit that film is meant to be.

Last year my mate hit me with some nasty flicks, the worst being the torturous The Incredible Burt Wonderstone; a film so bad it should be made fucking illegal.

The first film of next year is one we were both looking forward to till the word came out that it was dire; 47 Ronin. We held the coin toss on Saturday night round a mates house and sadly... I lost.

Each year starts with the potential to be great, and this years cinema looks like it's going to be epic, but I get the feeling the first one we see is going to be a kick in the nuts for me. It's a long year, and there will be many bad films forced upon weeping film fans, many battles in this year long, rolling war, but dammit...

...did I have to lose the first battle? 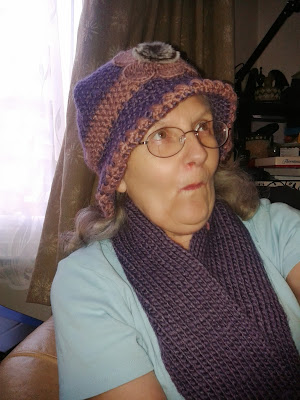 MY WORK IN PRINT AND ON KINDLE 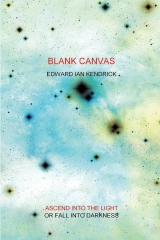 An accident on a colonial ship leaves it crippled and drifting through space. The custodial crew of seven have suffered losses and with no way to repair their vessel they must abandon the ship to organize a rescue mission from Homeworld. They leave behind a single crew member to keep watch over the five-hundred-thousand colonists asleep in suspended animation. Left alone, facing months if not years of isolation, a woman set to be the colony's 'master artist' must battle the demons of her past and the despair and loneliness of her present if she is to ever have a future...
Reviews for BLANK CANVAS
**** - A well written and thought provoking journey into the human mind.
***** - Superb read. A welcome addition to the science fiction genre.
***** - The best book I've read in a long time.
You can download BLANK CANVAS on kindle by clicking the link below.
http://www.amazon.co.uk/BLANK-CANVAS-ebook/dp/B00CQS9U5U/ref=cm_cr_pr_pb_t
If you want to order a printed copy of the book then go to the link below. Personally I think the print quality is excellent and I've always loved the physical connection between reader and book.
https://www.createspace.com/4304474
Or you could order a paperback copy from @Amazon by clicking the link below
http://www.amazon.co.uk/Blank-Canvas-Edward-Ian-Kendrick/dp/1490310193/ref=sr_1_1?s=books&ie=UTF8&qid=1374228900&sr=1-1&keywords=blank+canvas

I'm a self Published author in my late thirties hoping to make a real go at being a full time writer. I am very happily married to a wonderful woman and we have seven fantastic children.
Living on the south coast of England we see plenty of sun, sea yet sadly no sand.
I cover a variety of topics that interest me on this blog. I'll review books and films, comics and games, chat about my political frustration, wrestle toy animals and have a regular musical feature that I call 'Music Monday.'
I hope you enjoy the blog and I'll always answer a comment if I have time.